I had a dreadful night, unable to sleep, developing a deep seated chest cough an feeling very weak. During breakfast we discussed the options with our guide Nima and the proprietor of the Cho Lo Pass Resort, My Lhakpa Nuru Sherpa a very experienced guide and climber. It would take 3 days trekking to reach a point where we could descend significantly. The days walk involved a difficult Glacier crossing and a slight increase in altitude. Not very appealing or wise in my current state so a helicopter evacuation was considered the best option.
Lhakpa advised us that if the helicopter company could get prior approval from our insurance company they would agree to come and pick us up. We gave him our passport details and our Insurance Policy details with RACV Insurance and he made the phone call via the Everest Link Network. He further advised us that the Helicopter would not come without prior approval from our Insurance Company. Our initial thought was to evacuate to Lukla where there is a Swiss run Medical Centre. However, Lhakpa further stated that in his experience Insurance companies would only approve evacuation all the way back to Kathmandu where full Hospital Care was available. It was a 2 hour wait during which we assumed  the Helicopter Company  was clearing our evacuation with RACV, our insurer. We were in the dark even though a channel of communication had been opened to RACV. When Lhakpa got the call advising him that the Helicopter was on its way we breathed a sigh of relief.
We moved out to the landing field and Lea and I boarded the Helicopter with Nima. Our luggage was piled in and soon we were hurtling down the valley at 110 knots to Lukla. 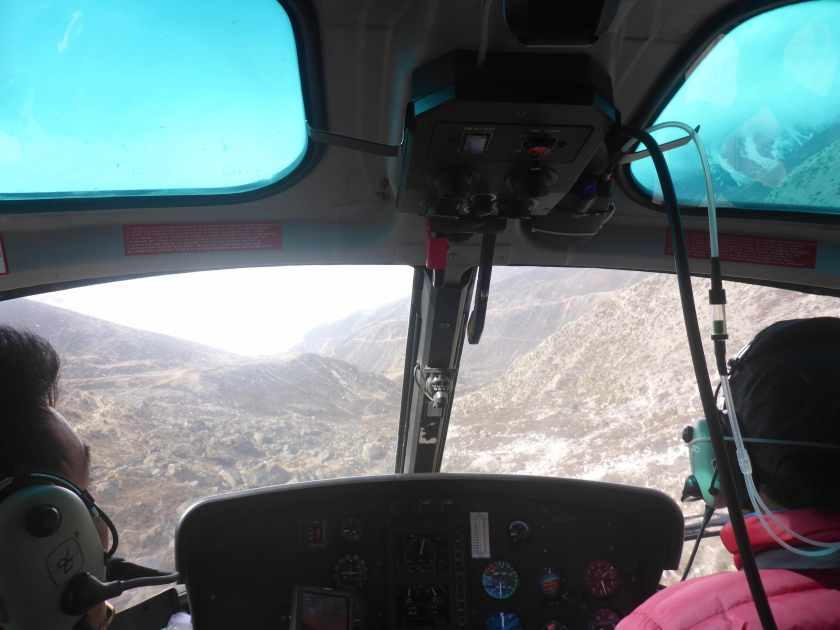 The clouds were shifting about but the runway was clear when we landed. 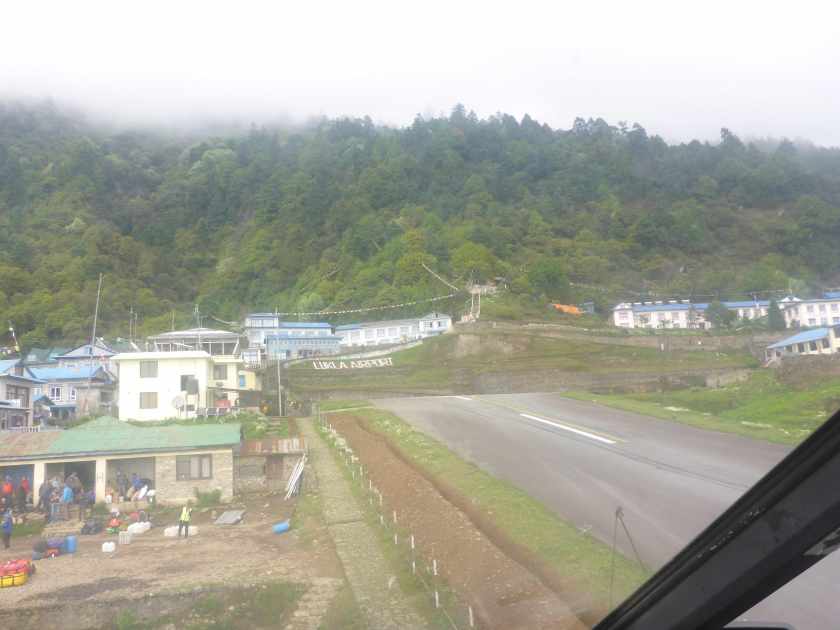 Almost immediately the clouds closed in and the Airport was closed. We later found out that no planes had come in or out of Lukla for 3 days. We made our way to a nearby tea house. We now had internet so messages to family were sent and Lea tried to contact RACV. Unfortunately we had plenty of data but no credit so the call to RACV dropped out. We further tried to call them through the International Operator for a reverse charge call as per the instructions on the RACV website but this failed too. RACV did not try to call back although we received an email from On Call International, RACV’s Agent, acknowledging that a Claim had been opened.

Nima found out that the Helicopter for the next leg of our journey to Kathmandu was waiting 300m further down, at Surke, for a break in the weather. We were being pressured to walk down to it. A 90 minute walk down steep terrain for 90 minutes and 300m down was the last thing I felt like doing. We decided to visit the Swiss run Medical Clinic here in Lukla.
The doctor diagnosed an acute viral chest infection that had bought on AMS. Some drugs for symptomatic relief were prescribed and we were recommended to descend further.
After a quick lunch that I couldn’t eat we agreed to walk down to the Helicopter. Nima took my pack and employed a couple of boys to carry our packs down.
It was a bloody tough walk down through small villages and farm plots growing vegetables. The Surke landing area was in the grounds of the local hotel on a flat overlooking the valley. 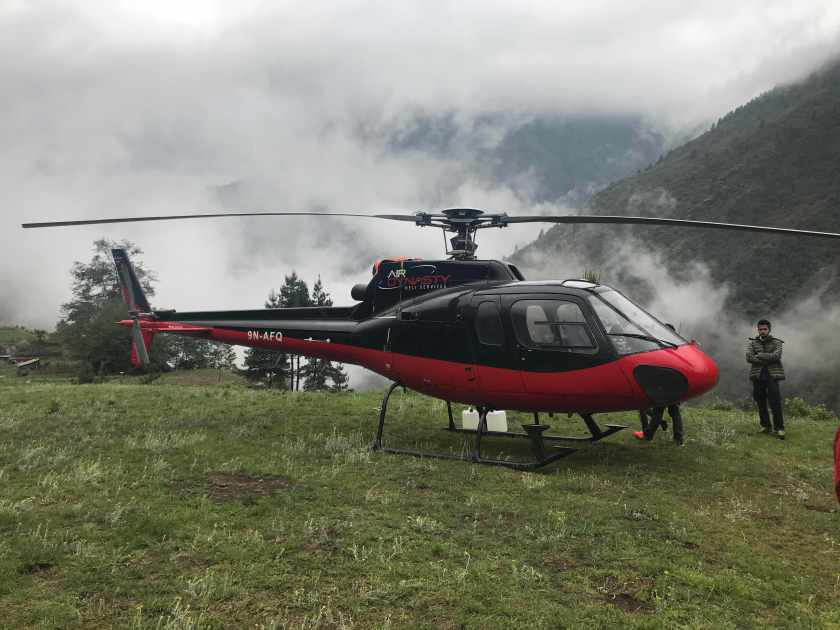 Our helicopter was waiting but as soon as we loaded up the clouds came in and blocked visibility. 30 minutes later there was a gap in the clouds and we were off. As soon as we dropped down we were out of the clouds and the flight was pretty smooth. Stunning scenery as we zoomed down the valley went by largely unappreciated.

Surprised at how much vibration occurs in a Helicopter. At Kathmandu an Ambulance was waiting to take us to Swancom International Hospital.

Here I underwent a barrage of tests including blood work and a chest XRay. I was given a lovely double private room and Lea was welcome to stay too. A steady stream of doctors, nurses and specialists came and went. We can’t praise Swancom International  Hospital enough. The staff and doctors were all excellent and very professional. The diagnosis was Acute Viral Bronchitis.

One thought on “Everest Base Camp Day 12”