After a great sunset and another peaceful night at Palau Sindu we were off again at 0400. 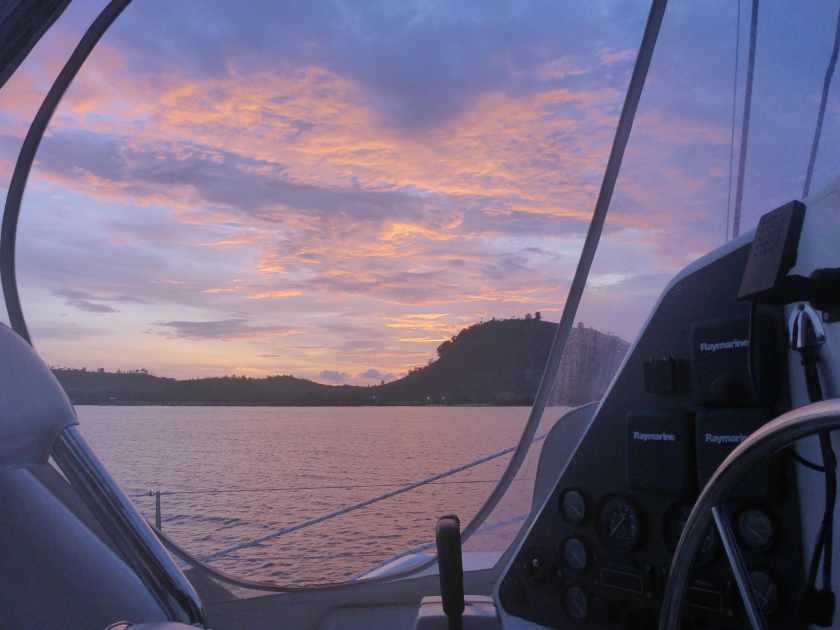 Just for a change the current was against us as we motored out of the Selat from the SW to the SE end of Sumatra. It was a very busy port with lots of lights and ships moving in and out. Fortunately all used international sound signals, had AIS and the correct Nav Lights so it wasn’t too difficult to negotiate.  iSailor was again much more detailed and accurate than Navionics.
We turned north and motored, still against the current, on into the Java Sea. The promised Easterly didn’t arrive until mid afternoon and then it was great reaching under Main and Genoa at 7-9knots all afternoon and night. Lea slept most of the day and was feeling very unwell. Throughout the night she bravely relieved me for a hour at a time every 2 hours so I could get some rest. It was a long night but good sailing. Poorly and incorrectly lit Tug boats were a nuisance again. Clear skies and moon light helped a lot but the sea state was very ordinary and aggravated Lea’s discomfort.
Wednesday April 11
The final 25 Nm to Belitung were a nightmare. We ran into a big squall which put 15-20 knots of wind on the nose and created a short sharp sea of exactly the wrong cadence for Gemini Lady. We hoppy horsed violently and Lea ended up curled in on the settee in the foetal position. The quaint Dutch built lighthouse was a welcome sight.
We finally arrived at Belitung’s NW anchorage . We pushed on the extra 4 Nm to get into the lagoon closer to our friend Ervan’s Restaurant.  We anchored close to Berserker 2 and Psycho Puss came in a few hours later just on dusk.

We had covered 236Nm in 36 hours, 150Nm under sail alone. 65% sailing is great in Asia.
I cooked a meal and got Lea to bed but she was feeling dreadful.
Thursday April 12
Our anchorage position caught a bit of cross swell which made it a bit jiggly and it did nothing for Lea’s condition.  She couldn’t eat any breakfast. Craig and Pam dropped by and helped by taking our jerry cans ashore. Lea was really feeling bad and just wanted to get off the boat (first time ever). She crawled into the dinghy and after picking up Heather off Psycho Puss we headed ashore. Lea had a good chuck on the way. Relieved to be ashore she managed the walk to Ervan’s place. Lea sat and buried her face in her arms. One of the locals saw her and asked what was wrong. He prescribed a fresh coconut to drink and it was like magic. Lea immediately began to feel better.
We had a little walk around the place reminiscing with Rod and Heather about our respective visits here in 2015. Not much had changed but the bar we all had frequented was gone and there were whispers of a new large resort to be built.
Back at the restaurant for lunch ( Lea was hungry again which was a good sign) we met Zac, Ervan’s cousin. Zac has an American father and Indonesian mother and is building a diving resort of his own nearby. Educated in the US and speaking fluent Indonesian he is a very personable young man with a vision. He was very enthusiastic and delighted in showing us the new resort he is building. Quite a creative effort using relocated old traditional houses and boats as the basis of the buildings.
We picked up our diesel (10K per indo litre) and headed back to the boats for snooze. We were still jiggling so I explored the bay looking for a better position. In the end the best spot was just 200m away to the East tucking in closer to the protective reefs. More in the traffic channel during the day but nice and calm at night.
Back to the restaurant for dinner. Along the beach we were adopted by 2 local dogs who raced around us playing all the way down the beach. Ervan’s wife, Penny, put on a fabulous dinner for us. Unlike last time we were here Ervan now serves beer so with Lea feeling much better all was good in the world.

Friday April 13
Took all the laundry in to Penny and Ervan drove us into town for provisioning. The traditional market was fabulous.

Ervan knows the town well so Rod picked up a new filter housing for watermaker and we got a replacement stop cock valve for the washing machine. Mission accomplished. Only downer was that the Chinese butcher had run out of fresh pork.
Lunch back at the restaurant before Zac picked us up for a snorkelling and sightseeing trip.

The clouds of a squall were rolling in but it looked like it would miss us so we headed slightly offshore to an interesting rock formation.

Here we snorkelled and swam through the fissure between the rocks enjoying being whooshed along by the surge through the gap. The coral wasn’t bad. 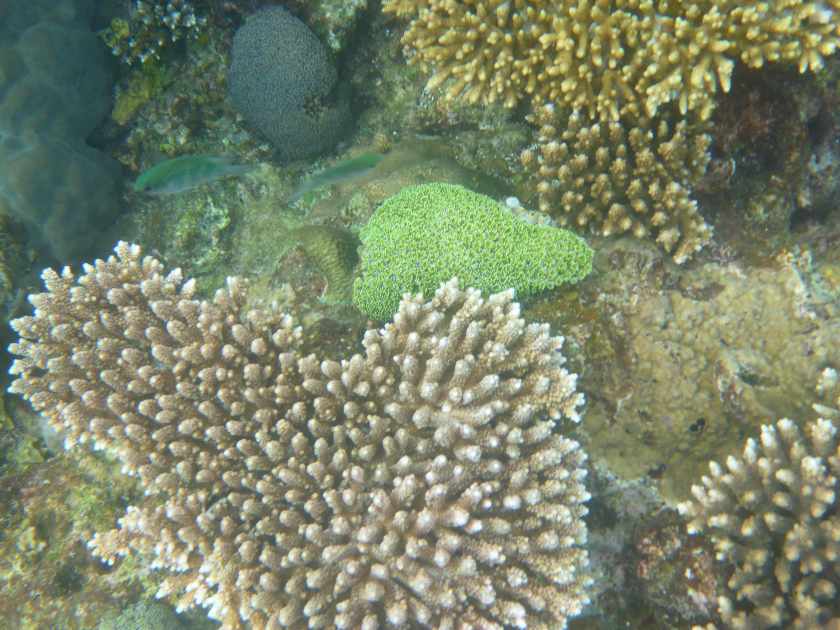 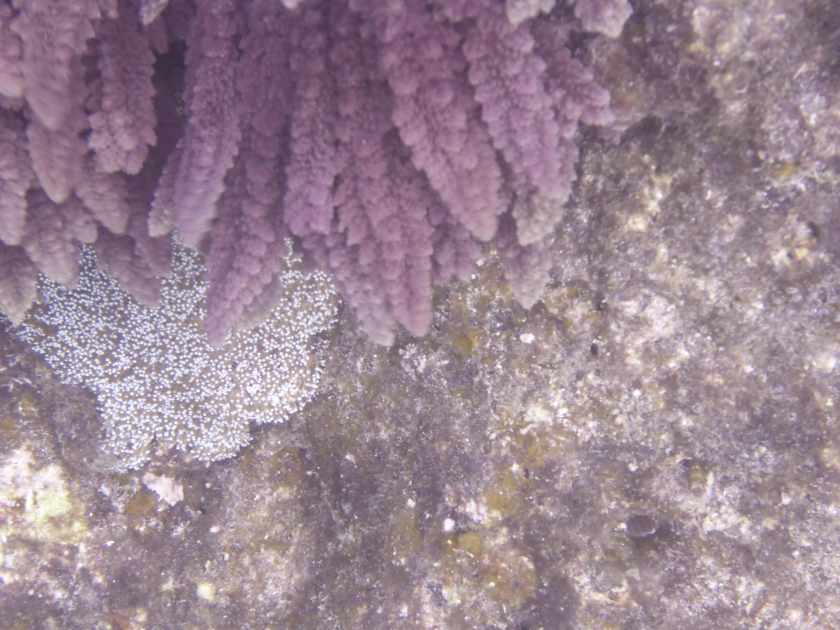 With the sky getting darker and the sea state building we headed back and stopped at “Pirate Island” to walk through the cave. 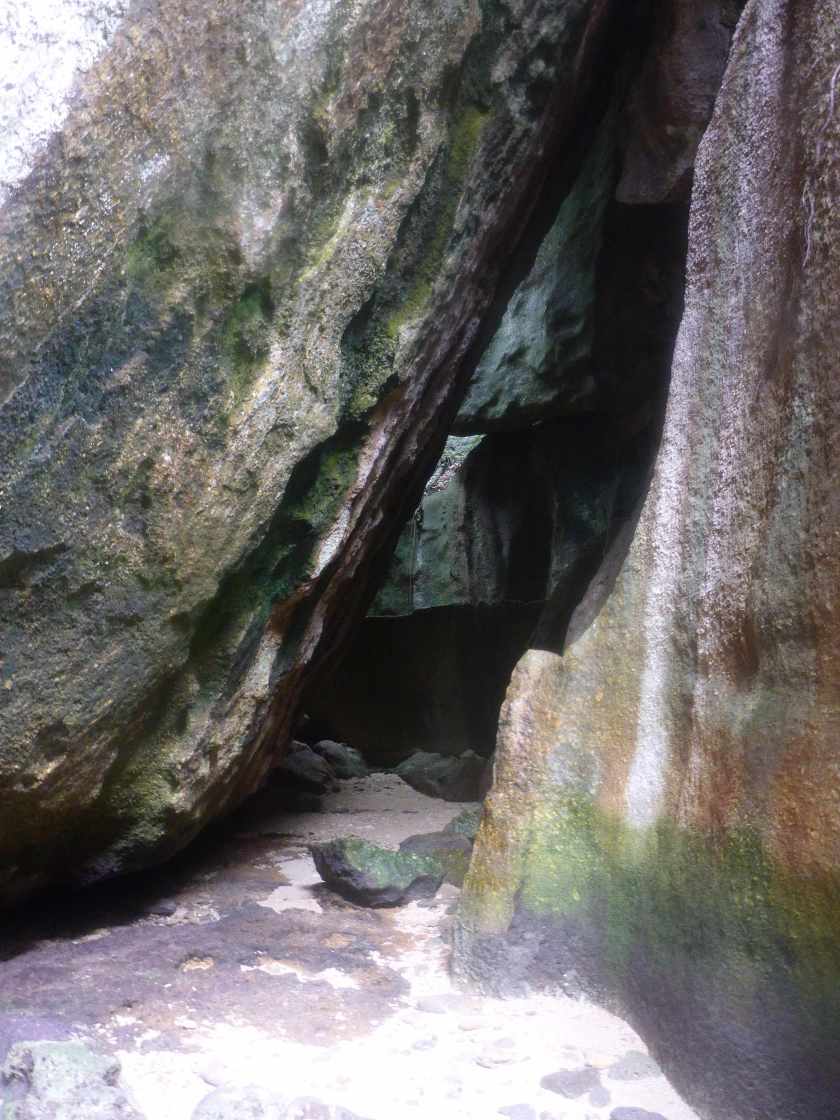 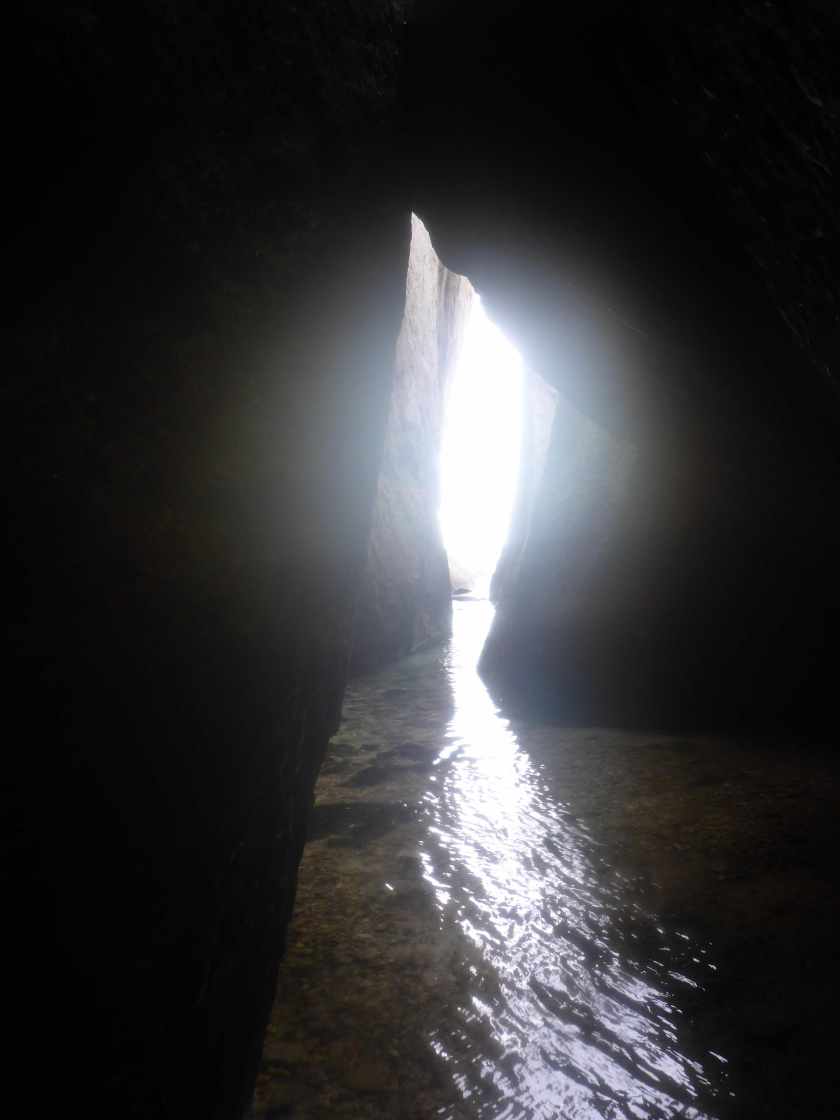 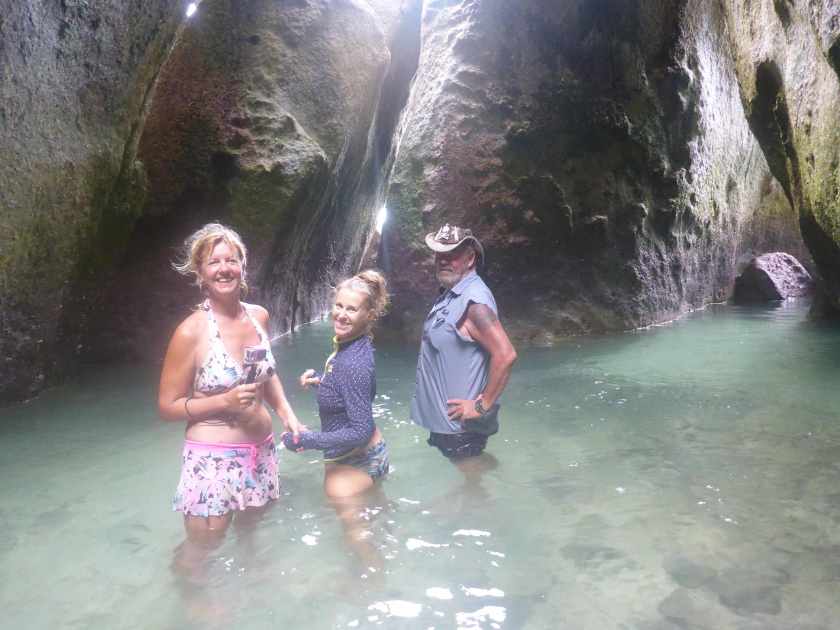 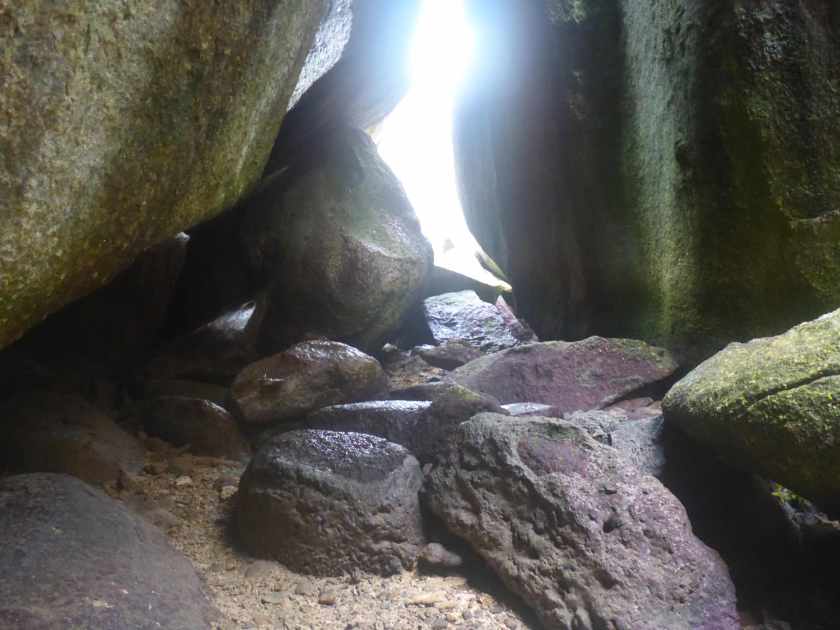 On the way back Lea found her missing broomstick. 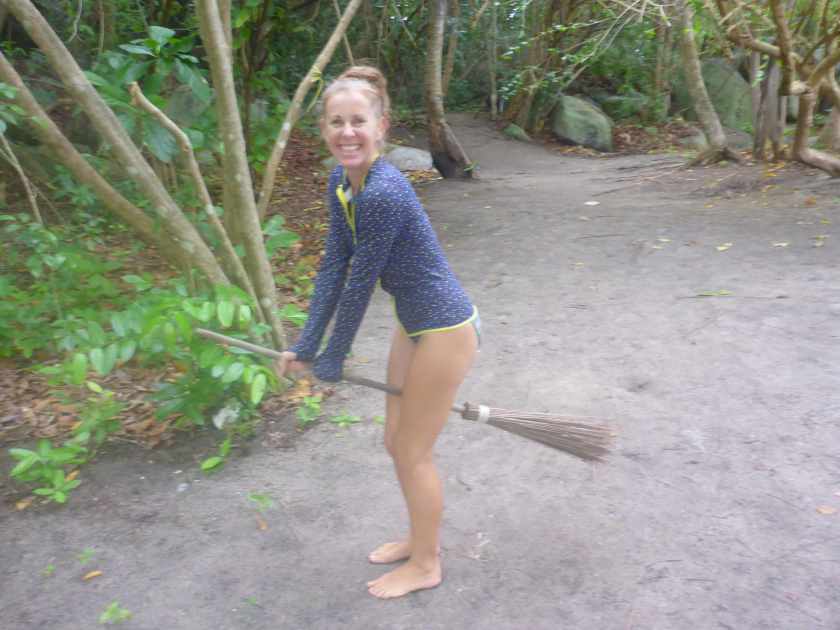 The sky was looking quite ominous now. 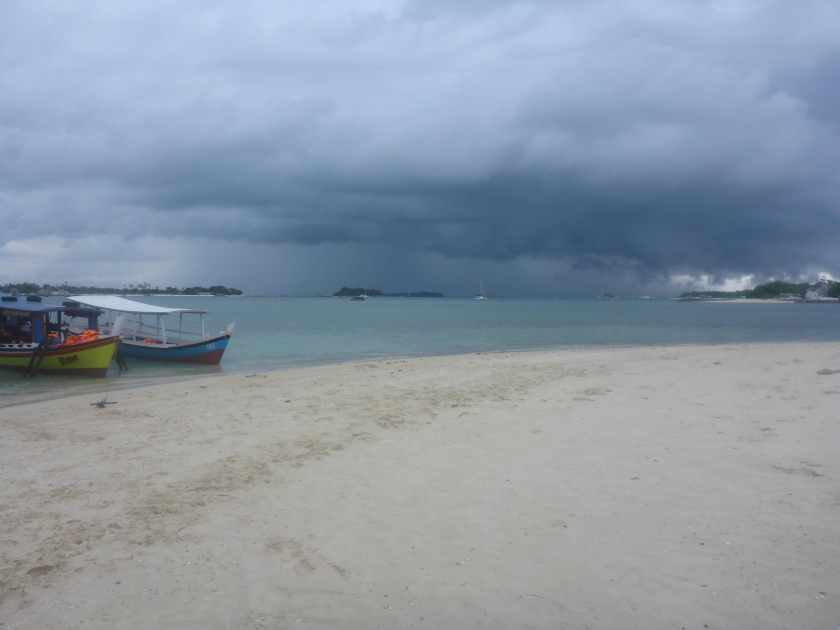 Just time for a quick visit to the old mansion nearby. The place was built by a bloke who got rich recovering and selling Chinese Porcelain off wrecks in the area, a highly illegal activity. When he was caught the government confiscated the house. It was very dilapidated back in 2015 but since then has been restored for wedding, functions and accomodation. 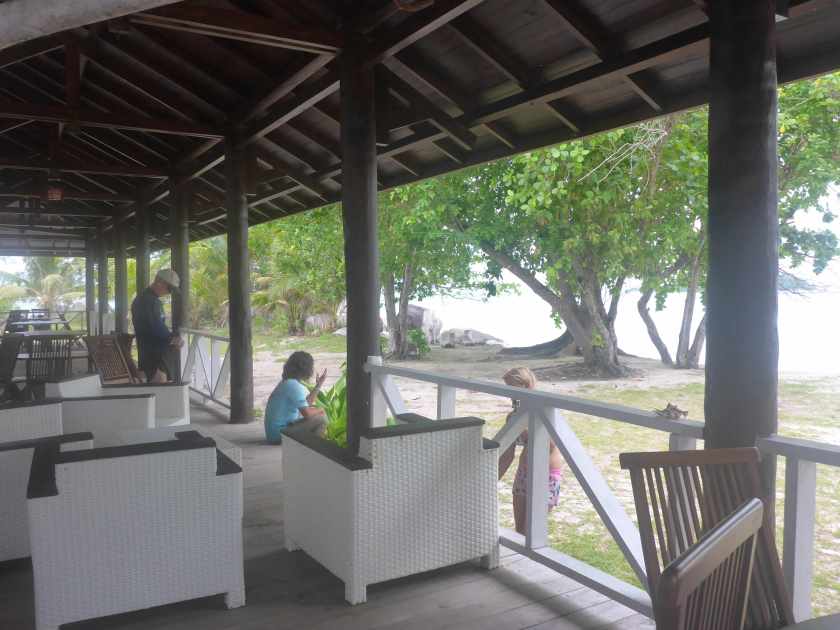 Back on Gemini Lady for drinks and a weather check before heading back to Ervan and Penny for dinner.  We were a bit disorganised as we had stripped down the Port water pump which was playing up, continuously cycling on and off. Having never had to touch the water pumps on Gemini Lady it was a bit of a learning curve to strip it, clean it and reassemble only to find it had made no difference. In the end it just need an adjustment on the pressure sensor and all was well again. 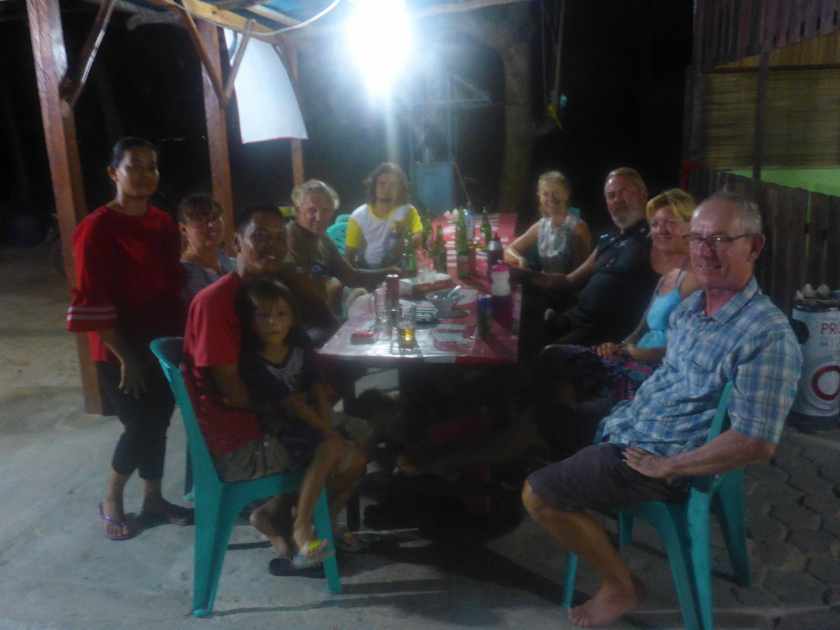 Another good night apart from our dreadful Karaoke (and Rod’s tummy) was had.

Big thank you to Ervan and Penny and their delightful family for making our stay in NW Belitung so enjoyable once again. Finished the night with American Pie joined by the locals before saying our goodbyes. We had to go as it was the last weather window before a week of Northerlies set in.
Saturday April 14
0700 start with a favourable breeze had doing 7-8 knots with the Main and Spinnaker up. The engines stayed off for 9 minutes before the wind died. So ended the only sailing for the day. In the afternoon we noticed the casing off the topping lift had frayed and broken. Must have chafed on the first reef pulley. Fortunately we had enough tail to cut it off above the damage and resplice it to the boom shackle. Easy fix for once.
Sunday April 15
Forecast wind was much lighter than expected so it was motor, motor, motor. At least we didn’t have to punch into wind and sea at all. Another clear night with only distant squalls showing on radar. The usual fishing boats and tugs towing barges to dodge. Psycho Puss followed in our wake.  Lea did another workout on her dawn watch to stay awake. The afternoon bought some breeze as a big squall bore down on us. We powered along keeping just ahead of the rain until dusk before sailing straight into another squall as it got dark.
It was pitch black and you couldn’t even see the front of the boat as we bounced around, edgeing our way into the anchorage at the bottom of Lingga Island. Navionics Community layer with sounding, put up by our friends Heather and Neil on Tiki a couple of years ago, guided us safely to our nice calm anchorage.