Lots of perconceived ideas about Brunei such as Sharia Law, women in full Berqa, repressed population and a hypocritical degenerate Sultan who still employs a harem of western prostitutes and doesn't like Australians.

We left Miri early in drizzle but there was a bit of wind so the Schreecher assisted as we headed north. The breeze filled in as we turned east so we put up the Main and enjoyed a great broad reach toward Kuala Belait River our first stop in Brunei.

We had to seriously dodge a fishing net that was laid directly in front of us. A ship nearby had to make way for us dodging the net. We waved our appreciation and got a toot in return. The ship then deliberately altered course to run straight through the net much to the dismay of the fishermen. The ship stopped and the fishermen went over and some discussions were had. Not sure if the ship had tangled in the net or if it was telling off the fishermen. We were beginning to supect that this ship was our “escort” into Brumei. Others in the fleet suspected we were being shadowed and watched.

Easy but shallow entrance to the River then sat down to fill out the paperwork Allan had given us in Miri.

Port Arrival form in triplicate with no carbon paper

Declaration of alcohol in possession in duplicate

Plus $20.00 SGD for a visa because the Sultan doesnt like Australians after they insulted him by sending him out of the country one time when he arrived without a visa.

We then went ashore to the Yacht club with the tender service provided. We received a very warm welcome from the Yacht Club Commodore. After an hour going through all the paperwork with the agent we went of into town to explore. It was Ramadan so we were surprised to find many food shops open but no one was eating. Also there were no Berqa's. The dress code was very similar to Malaysia with women in colourful head scarfs and pretty, although modest clothing.

We had been advised that for men long pants were required and ladies should be well covered. However, the reality was much more relaxed and casual. Lea bought a new pair of “heels” for the flash dinner at the Polo Club tomorrow.

Accross the road from the yacht club was a huge food bazaar cooking everything for the evening break fast. We were encouraged to try some. We bought a small snack. The stuffed squid looked fantastic and we learned it was filled with spiced mash potato. Tempting but we were saving up for the big dinner planned.

Our first tour was of the Oil Industry Infrastructure, mainly Shell. Allan took us around and gave us a good commentary on the history and culture of Brunei. There are still a few of the old “nodding donkey” oil pumps. 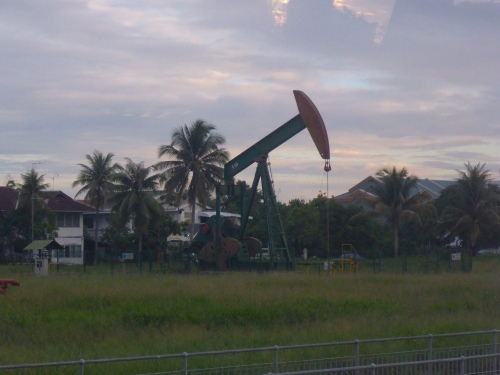 But most of the infrastructure is modern. 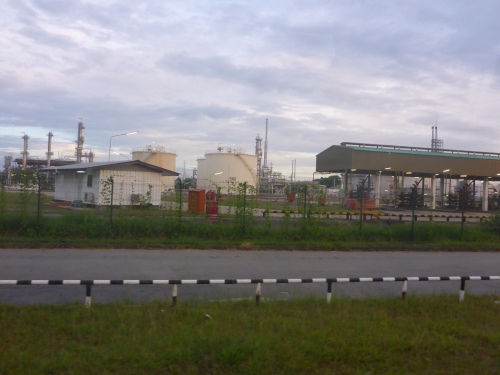 Not without its monuments to bad taste and too much money. 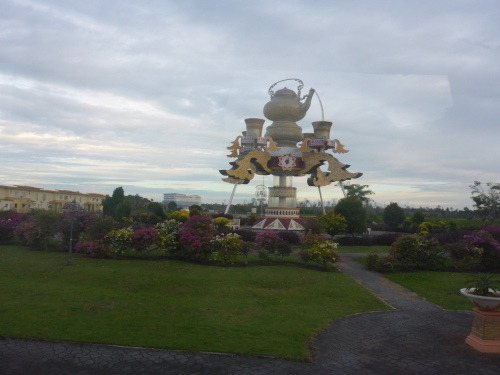 Some good news is that 60% of Brunei is still virgin jungle and 50% of that has been given to the World Widlife Fund for habitat protection.

A brief gap between the end of the tour and dinner saw us up the top of a nearby hotel to catch the view. 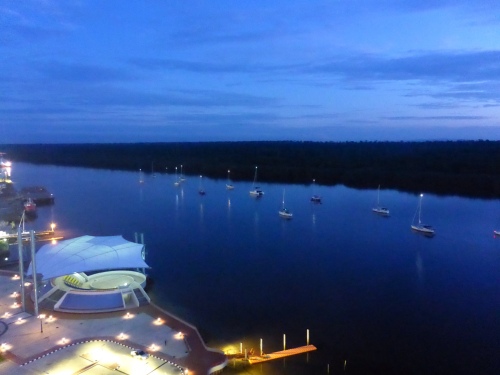 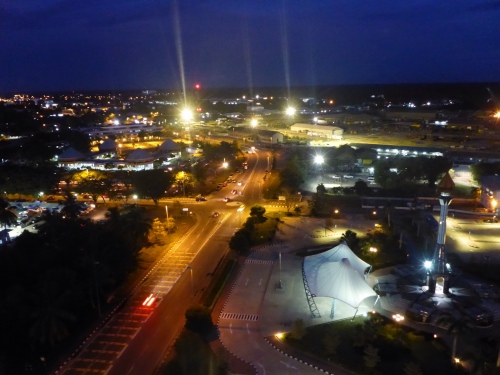 Our dinner at the PBBC was a friendly and intimate affair. The club rooms are charming, early colonial style with high timber lined ceilings and opening storm shutters. Fans sweep a breeze over the room and as the dining room is on the second floor it picks up the cool sea air.
A delicious buffet was organised for us and the welcome speech by the commodore, Anna, was personel and heartfelt. The only thing missing was the beer and wine.

Another early start to get the tide out of the river. Once out of the river we lifted the Main and as the breeze increased the Spinnaker went up. A bit slow at first but the breeze freshened mid morning and we had a fabulous Broad Reach and were soon averaging over 8kts. 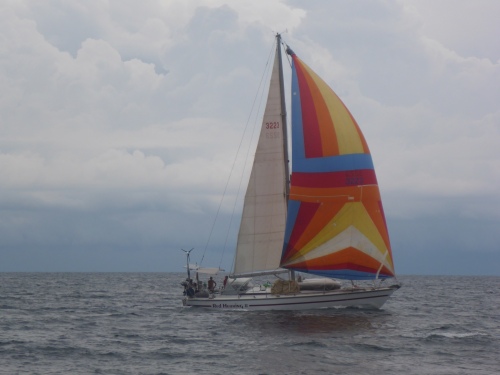 Passed a few of the boats who left earlier including Red Herring II. Got safely into Jerudong Harbour just as a squall hit. We were the first boats ever to be given permission to anchor here and we had strict instructions on what not to do. Behind the shore trees were the Sultans holiday palace and other homes of the wealthy.

Do not explore in dinghies.

Do not walk the beaches or breakwater.

The harbour and precinct was originally built by Prince Jeffrey known as PJ the Sultans younger brother as a family retreat. The harbour was originally dredged out to 9m and the retaining wall was huge and neatly finished in concrete. The rocks used had to be imported by barge from the Phillipines as Brunei has very little rock of its own.

The beginnings of a marina are tucked around the protected corner where we anchored to get out of the now strong winds. The beach we were supposed to land on was now a surf beach, so we broke the rules by landing well down the beach and walking back to the guard post.

Allan met us with the bus for a tour of this area that used to be an enclave for the recreation of the rich. This included the Polo Club with its stables for 2500 horses. Only about 250 remain, the rest have been sold off. 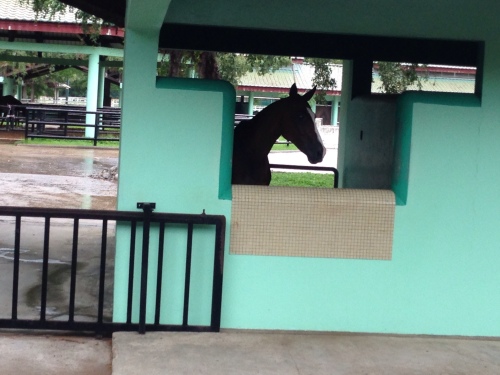 PJ nearly bankrupted the country back in 1998 when he was Minister of Finance by building all this stuff and many other projects.

and multiple Polo fields. The Sultan would invites guests from around the world to visit. They were accomodated at the magnificent Empire Hotel. 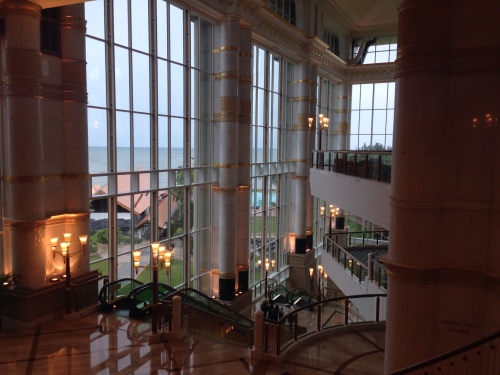 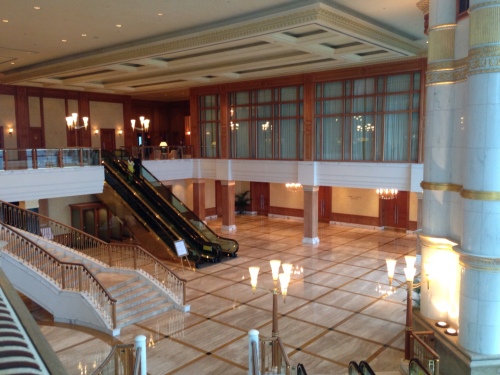 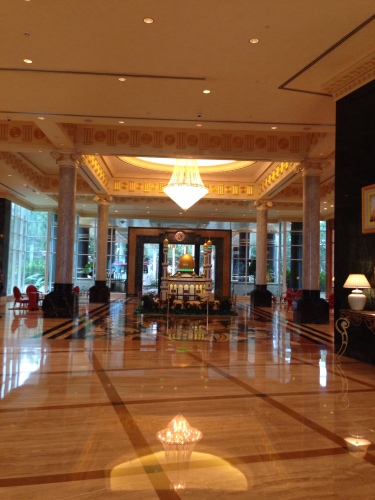 The hotel currently runs at about 30% occupancy. There is also a Golf Course, Amusement Park, Entertainment Stadium as well as the grand Polo Club. Much of this infrastructure is now unused and falling into disrepair but other parts have been opened up to the Public.

There is a fabulous medical centre here and it is being expanded with the construction of a massive Cancer Hospital. The co- payment for medical treatment in Brunei is $1.00 for locals and $3.00 for foreigners. If you need specialists not in Brunei they will fly you to wherever you need, usually KL or Singapore.

Dinner at the Polo Club was fantastic with an endless buffet of all types of food.

No alarm clock this morning. Coffee on Esoterica before motoring off the 26 Nm to Serasa. 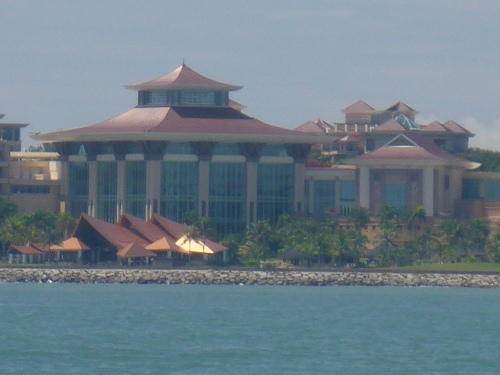 Passed the Empire Hotel, up to the Port of Muara.

Anchored Off the Royal Brunei Yacht Club. Not quite as grand as we were expecting but very welcoming. More paperwork in triplicate for this port. Lea and I enjoyed a cool off in the 20m pool, a welcome relief after the hot slow trip. A big washing machine allowed us to catch up with all the sheets and towels from the the Film Crews stay.

Another great buffet dinner and we were allowed to take our own alcoholic drinks ashore.

Lost my good sunglasses out of my backpack while bending down to untie the dinghy. Bugger!

Lea went off for a run and swim. I Went snorkelling in the murk under the dinghy landing looking for my sunglasses. Vis was about 8 cm so no joy there. Lots of waiting around again to get our passports back, then we motored up river to the RBYC venue at Kota Batu. Graeme and Karen off Red Herring II joined us for the trip.

Anchored just before a squall came through from the opposite direction. We dragged so had to reanchor. Lea got back into her Bikini and in the pouring rain went up to the foredeck to pull up the anchor. She found lots of plastic bags on the anchor. Seemed to dig in ok this time and we were now running late for our “Cultural Tour” of the Capital City. Braved the rain for the dinghy trip ashore and were hustled, dripping onto the waiting bus. Allan's timeline was very tight to get to the Regalia Museum.

We made it and enjoyed an hour viewing all the Sultans Regalia and gifts received. We also saw his two great golden chariots. 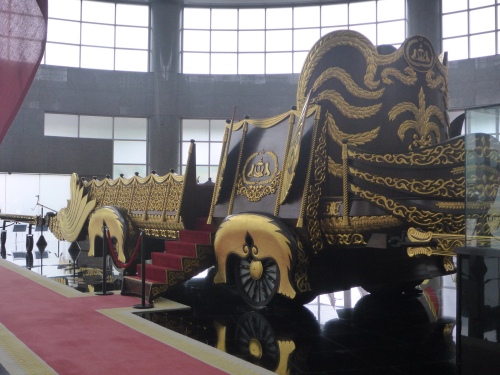 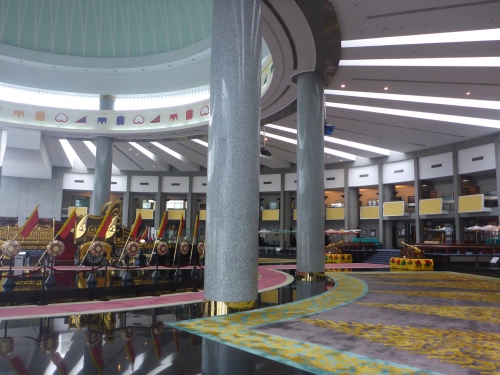 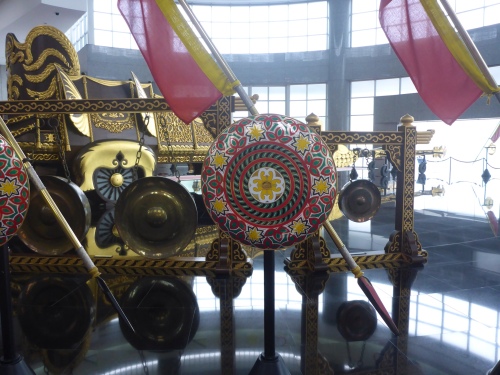 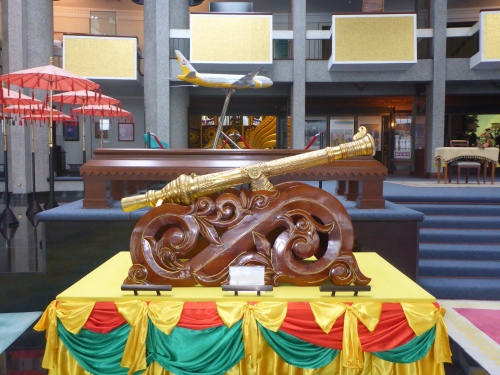 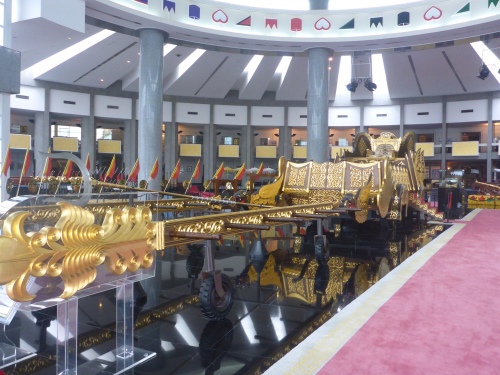 Then on to the new mosque, 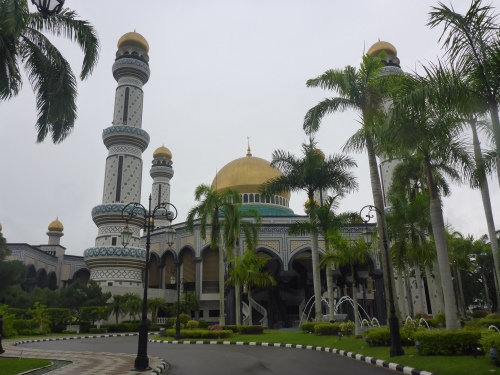 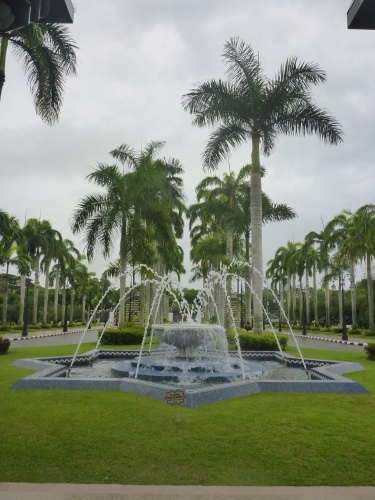 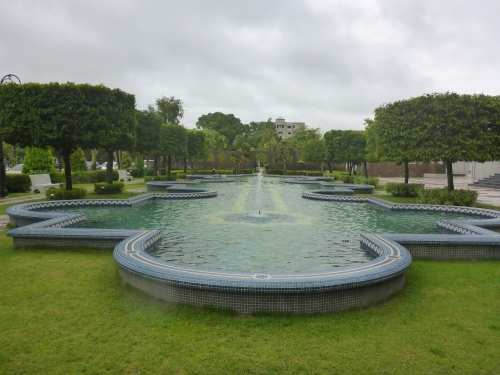 The old mosque, built by the Sultans father was a bit more austere and some believe it to be more dignified than the glitzy new one. 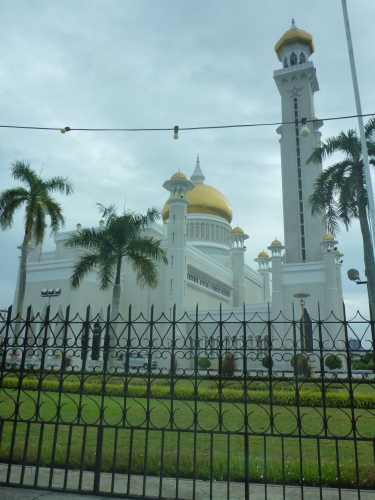 It was raining again so good photos were hard to get. 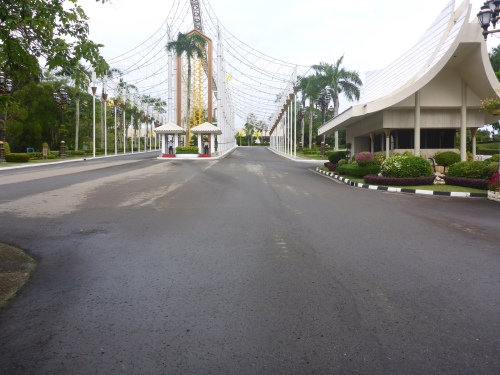 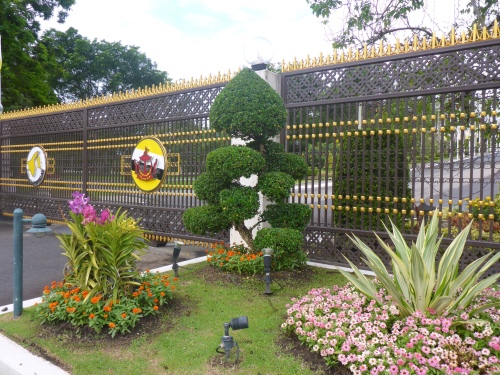 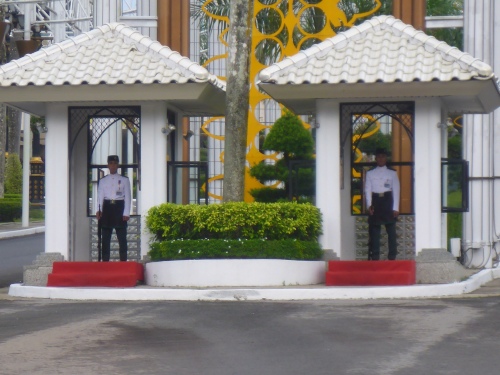 These Gherka Guards were very fidgity. Never saw that at Buckingham Palace or the Vatican. 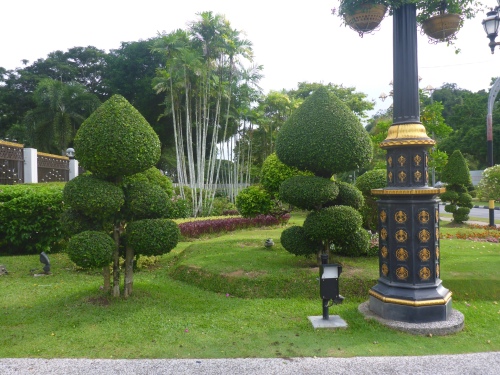 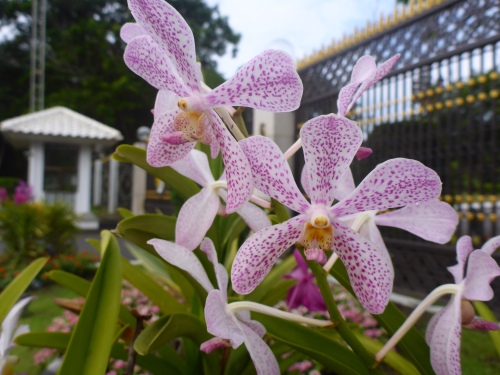 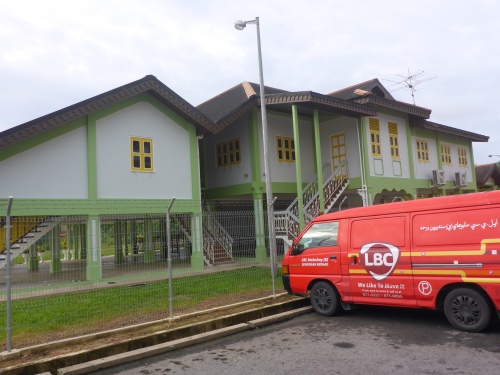 Allan gave us a good informative commentary throughout the trip. Our last stop was a local Water Village. These villages are built on stilts out over the River which then provides all sanitation requirements courtesy of large resident catfish. We took a water taxi over to this haphazards collection of houses that you could mistake for the poorer part of town. 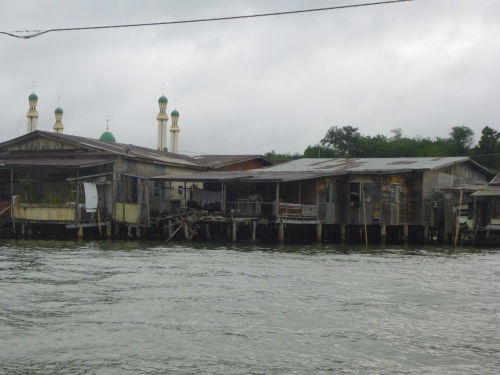 However, the houses are rarely found for sale and prospective new owners must be approved by the community. No Westerners or expats have been allowed to purchase yet. Many residents have houses in town but prefer to spend weekends in their Water Village homes.

We had afternoon tea in the formal area of a large house. 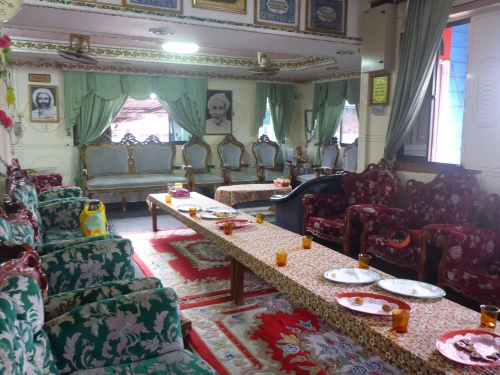 We got to explore this large home on the water and found it had all the mod cons you could want.

Returned to Gemini Lady for a rest before dinner at the RBYC Kota Batu Clubhouse. 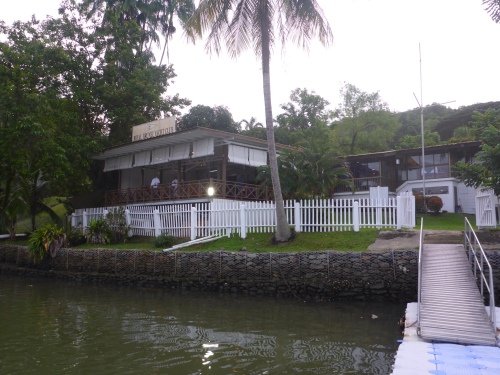 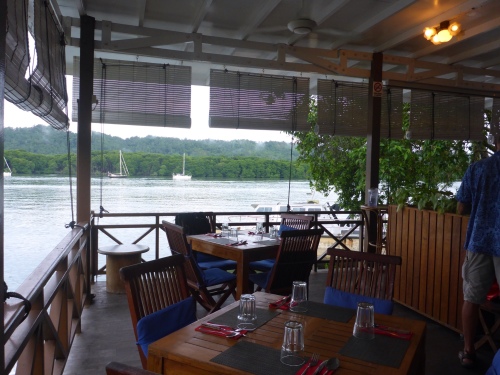 Got back in at 1900 for a drink before the 1930 dinner only to find most people had already finished their dinner. Spoilt a good night but it was a carvery and the roast meats were plentiful and delicious.