Woke to heavy toxic smelling smoke. Ashore they were burning of plastic rubbish. There was no breeze but we moved off quickly and motored the 15Nm ENE to Palau Tenggol. Reknowned for being a difficult and deep anchorage but with fabulous snorkelling we were keen to check it out.

Carrie and Persephone were all ready there when we arrived and had taken up 2 moorings. Brian off Persephone came over and directed us to a third mooring with a small bouy. Brian had dived the mooring and advised us it was ok and tied to a sunken wreck. Persephone had spent last night there. After tying up Dave and I set off to Sonar Chart the bay while the girls went off snorkelling. We joined them after surveying the bay.

The visability was fanstastic with lots of fish but only average coral. Water temp is a bath like 31 degrees. We stayed in until the skin on our hands and feet turns white and wrinkly.

We dinghied over to snorkel the north side of the bay and found lots of bleached coral. Overall not as good as we had been led to believe.

Quiet Achiever arrived and Lea directed them to the only good spot in 16M of clear sand just behind us. The rest of the bay was over 35M deep or shallow coral reef.

Lea and I spent some time cleaning the hulls. Its only been 8 weeks in the water and already we are getting the green beard and barnacles. Not impressed at all with Jotun Antifoul Paint. The wreck below us was clearly visible.

Quiet Achiever enjoyed a good snorkel but then moved on. An hour later Anthem arrived so we directed them to the same sandy spot. Just after they got settled a local dive boat came by and orderred Anthem to lift their anchor. The officious pint sized female divemaster harrassed Anthem until they did so. I went over to the dive boat and tried to discuss the issues. It was already late in the afternoon and I explained that we had surveyed the bay and the anchor was in clear sand. Anyway I got nowhere with her and she rudly dived off the boat rather than talk further to me. Another lady on board was much more reasonable and we agreed that the Authorites would be contacted tomorrow for clarification of the issue.

Jack and Jan bravely moved Anthem to another tiny mooring, that we had rated as for dinghies only, very close to the rock walls and coral bommies. They snorkelled it and decided it would be ok. If the wind had come up during the night they could have been in serious trouble.

I emailed Sazli and Patrick of Sail Malaysia to inform them of the issue. I was a shame, the Island is beautiful and has 3 small Resorts. We would have liked to go ashore for a meal but the divemasters attitude put us off. A magnificent pair of Sea Eagles soared high above us all afternoon.

Glassy calm morning and we noticed and smelt diesel. Dave finally tracked it down to little bubbles of fuel oil rising to the surface about 3 m infront of our bows. The wreck below us is leaking fuel. The fuel tanks must be corroding. If the leak gets worse the fuel oil will do a lot more damage than an anchor on clear sand.

Left early and motorsailed up to Palau Kapas, as we left we had a look and noted the position of 2 more moorings just north of the Tenggol Bay area. We added these to the Navionics Community database. We arrived at Kapas just as the breeze came in.

As we were anchoring, Robyn, off Kiwi Coyote came over to warn us of an underwater pipe near by. Before we pulled the anchor in Lea snorkelled over it to check. We were well clear of the pipeline; just a standard polypipe taking water accross to a nearby island resort.

29 boats were in the beautiful sandy anchorage and we enjoyed a great couple of days snorkelling, swimming, playing cricket and trekking the island. The resorts ashore were very laid back and casual. We enjoyed dinner ashore at KBC (Kapas Beach Chalet Resort) and went back for breakfast finally having a traditional Roti Cheni with curry for breakfast. 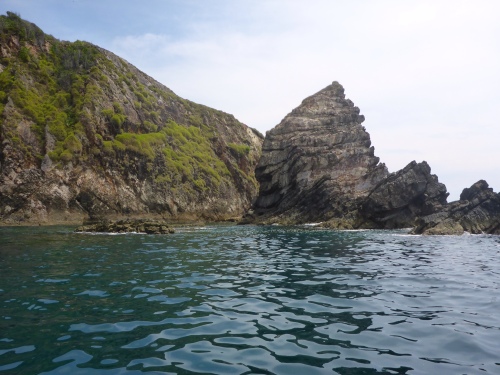 Cliffs harboured a “Bat Cave” that you could dinghy into. Lea declined that trip. 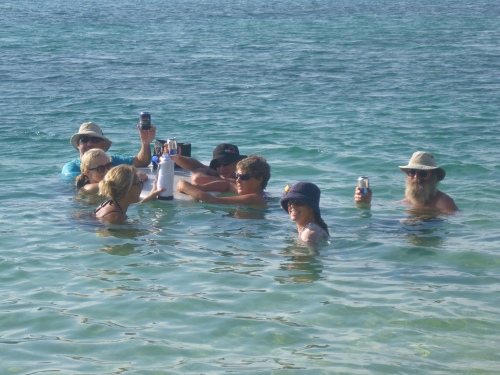 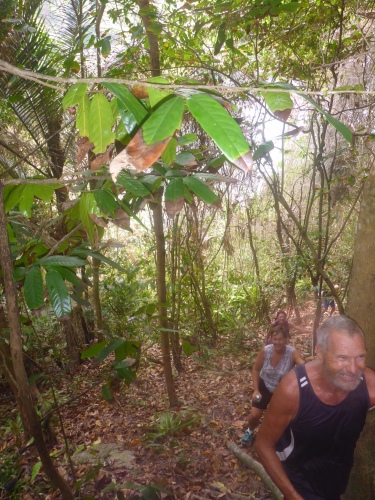 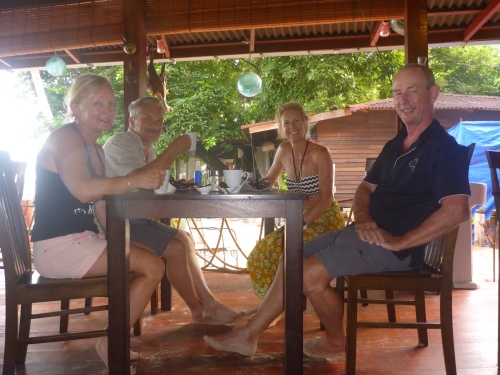